This diagram below shows a number of scenarios where you may deploy a remote access solution. 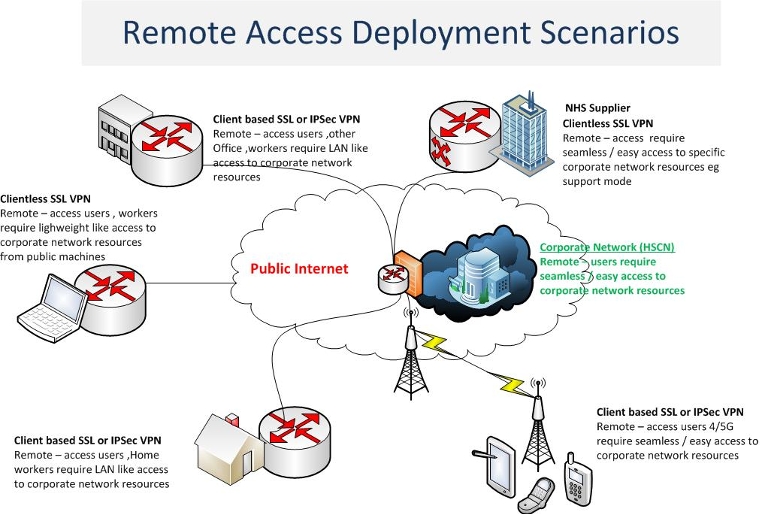 Clientless secure socket layers virtual private network (SSL VPN) lets NHS users establish a secure, remote-access VPN tunnel to an Enterprise Security appliance that can offer administrators a single point of control to assign granular access based on both the user and the device via a web browser. Users do not need a software or hardware client.

Clientless SSL VPN provides secure and easy access to a broad range of web resources and web-enabled applications from almost any computer on the internet. They include, but are not limited to:

Client applications are installed on endpoint computers and devices. Clients are usually installed on a managed device, such as a company-owned computer. The client supplies access to most types of corporate resources according to the access privileges of the user.

With the re-deployment of staff to remote locations there may be the requirement to create a split tunnel to afford access to corporate systems as well as the internet, whilst minimising demands on your corporate network. Learn more about guidance to split tunnels.

Due to current circumstances, large numbers of GPs and other staff are working from remote locations but require access to their on-premise systems, such as DOCMAN. Historically this has been achieved using an RDP (Remote Desktop Protocol) session however following migration to HSCN this port (3389) has been blocked for security reasons.  We have provided a guide to the risks and mitigation's around this topic.

Generally described as one of the largest pros for the SSL VPN solutions. SSL is a common protocol and most web browsers have SSL capabilities built in. Therefore almost every computer in the world is already equipped with the necessary "client software" to connect to an SSL VPN.

Traditional VPNs rely on IPSec (Internet Protocol Security) to tunnel between the two endpoints. IPSec works on the network layer of the Open Systems Interconnection (OSI) model - securing all data that travels between the two endpoints without an association to any specific application. When connected on an IPSec VPN the client computer is "virtually" a full member of the corporate network - able to see and potentially access the entire network.

The majority of IPSec VPN solutions require third-party hardware and/or software. In order to access an IPSec VPN, the workstation or device in question must have an IPSec client software application installed.

Cloud based remote access delivers a managed service via bespoke client software that provides secure VPN connectivity. The services can be tailored to provide independent access or combined access connectivity to use other business solutions such as UC and VC services. Cloud based solutions provide low cost and scalable solutions and use industry standard security protocols and processes.

Guidance has been produced on how public cloud services are connected to HSCN and should be used to define what approvals and organisation obligations are when connecting Infrastructure from a public cloud provider directly on to HSCN.

There are a number of common approaches that can be used to address several Cloud Security Principles. There are 14 CESG government principles that have been created.

Examples of some of these cloud service specific principles are:

Mobile based remote access utilises the 3G/4G mobile network infrastructure and allows end users to remotely access applications and information from a variety of devices (such as smartphone, tablets, laptops). These connections are facilitated via secure remote access processes and procedures. NHS organisations must ensure deployment of appropriate user access management (such as IPSec tunnels, Smart cards, two-factor authentication processes), and that the corporate network security infrastructure is monitored and maintained correctly so that any remote access services does not become a weak point in overall IT security.

There are some essential factors to consider when choosing remote access solutions for an NHS mobile solution in an organisation:

Find a full list of the cloud security principles