Health and social care organisations can buy HSCN connectivity from a choice of HSCN suppliers within a competitive marketplace. To support organisations to connect to HSCN we have created a 4-step customer journey.

Health and social care organisations, as HSCN consumers, can buy HSCN connectivity from a choice of suppliers within a competitive marketplace.

A list of HSCN suppliers is published and kept up to date on the supplying HSCN services webpage. Consumers can engage with any consumer network service provider (CNSP) to procure HSCN connectivity services.

You can also use the new HSCN dynamic purchasing system (DPS) to obtain HSCN connectivity services conveniently and cost-effectively.

The DPS, known as RM3825, is managed by the Crown Commercial Service (CCS) and provides a simple and efficient way for health and social care organisations to buy HSCN connectivity from a choice of compliant suppliers.

The HSCN customer journey is a 4 step process, from making contact with a supplier through to connecting to HSCN. 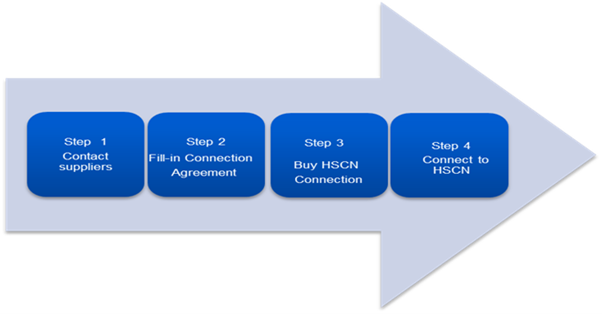 HSCN connectivity is supplied via a marketplace of compliant suppliers (called consumer network service providers or CN-SPs); you can find details of which CN-SPs have achieved compliance, and an explanation of the HSCN compliance process on the Supplying HSCN services page.

Every organisation that wants to use HSCN must complete a Connection Agreement.

You'll need to provide the following information to us to complete a Connection Agreement - these details should be submitted by email to enquiries@nhsdigital.nhs.uk:

Once we have received this information we'll send an invite with registration details by email to the nominated contact details.

Once you have contacted a number of suppliers, and compared the quotes they have offered, for the type of connection you need, you'll be able to:

You will not need to confirm these details to NHS Digital as we'll be working with suppliers to make sure we are aware of any new organisations joining HSCN.

To connect to HSCN you'll need to:

Your supplier will provide you with details of any steps you will need to make at the site, or sites, where you'll be connecting to HSCN.

If you would like more information on any of the steps in the customer journey you can contact us at enquiries@nhsdigital.nhs.uk.