All organisations that provide NHS funded IAPT services in England must submit data. This page explains the data you need to submit and how.

A Data Provision Notice (DPN) has been published and is available on the NHS Digital DPN webpages.  This means that all providers of NHS-funded IAPT services are required under Section 259 (5) of the Health and Social Care Act 2012 to provide the data set as specified by NHS Digital within the DPN.

How to implement the IAPT data set

You can also refer to the full implementation guidance available from the DCB1520 information standard. Section 3.5 contains a step-by-step guide for new and existing users.

The requirements specification, available from the DCB1520 information standard, defines the scope of the data set, what is required from providers and how NHS Digital will assess that a provider has complied with submitting the data to meet this legal requirement.

Version 2.0 of the IAPT Data Set received approval from the Data Coordination Board to start collection from 1 September 2020.

The ISN and formal standard documentation for IAPT v2.0 is published on the DCB1520 webpage.

A corrigendum has been published on the DCB1520 webpage to provide notice of corrections to version 2.0 of the Improving Access to Psychological Therapies (IAPT) Data Set. The corrections relate to:

The updated Technical Output Specification, Data Model, System Conformance Checklist and SNOMED mapping documents, have been updated and published below that reflect these changes.

Version 2.0 now contains all of the necessary data requirements for the Employment Advisers and integrated health pilots collections, so these requirements will no longer be detailed in separate specifications.

How to submit data via SDCS Cloud

The IAPT Data Set is changing its submission platform, from the Bureau Service Portal (BSP) to the Strategic Data Collection Service (SDCS Cloud), for version 2.0.

For information and guidance on the SDCS Cloud, including how to register for a user account and guidance on submitting data, please see the Strategic Data Collection Service (SDCS) Cloud web page.

The intermediate database (IDB) is now available for download for IAPT v2.0 submissions from September 2020 data onwards.  Before submission, your data must be entered into the latest version of the IDB.  The intermediate database (IDB) is a tool which enables the collation of data for submission of the IAPT data.  It is a Microsoft Access database and data must be provided in this format. Once all data has been uploaded to the IDB, NHS Digital can extract the data as a whole and begin processing it.

The database can only be accessed and downloaded from the NHS Digital Technology Reference Data Update Distribution (TRUD) pages.  Previously the IDB was available to users via the NHS Digital Contact Centre, however this is no longer applicable.

If you are not already registered on TRUD, you can register via the link on the TRUD homepage. Once registered, the IDB is located via the ‘data set development services tools’ link and new users will need to click on ‘licences’ which will enable a ‘download’ link to open.

When you submit data to SDCS Cloud, the system generates a report describing the data quality errors and warnings present in your submission.

In July 2020, we delivered a webinar which explored DQ issues and provides guidance on how to improve data quality in your submissions.

Here's a recording of the webinar:

How to get help

If you have a general enquiry about the data set, contact us at enquiries@nhsdigital.nhs.uk or telephone us on 0300 303 5678.

Keep up to date with IAPT data set news and updates

There are various ways that you can keep up to date with the latest IAPT news and information.

Once you have subscribed to the Mental Health Update, you will receive other communications about up and coming events and other important news and information. Please take the time to read through these communications.

Thank you to everyone who came to our IAPT stakeholder events, held in Leeds and London during November. We hope attendees found the updates useful and the feedback we received on the day was invaluable. Please follow the link below to view the presentations slides from the events:

Please note that any references to the IAPT v2.0 launch date may be out of date and should be disregarded.

The correct IAPT v2.0 go-live date is referenced throughout this web page. 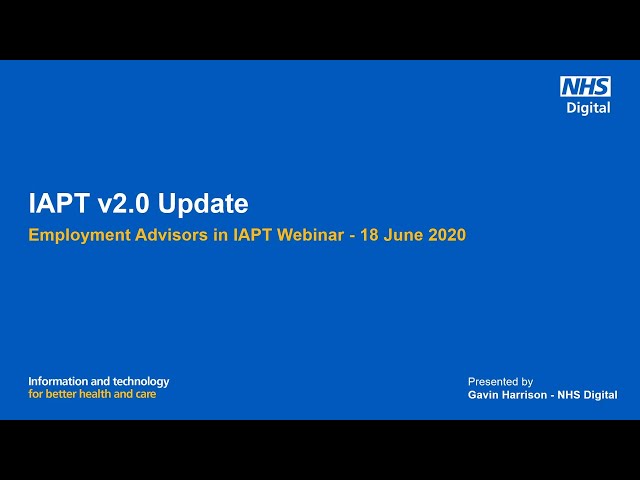