It’s been another whirlwind year in the digital campaigns arena. Here’s a snapshot of what the Digital Campaigns Team (DCT) worked on and delivered in 2017.

The Digital Campaigns Team is a multidisciplinary team working in an agile way to deliver Public Health England digital campaigns and several of their national health campaign websites – this includes:

January – Be Food Smart campaign
Campaigns kicked off 2017 with the launch of the Change4Life Be Food Smart campaign. This centred around the launch of the new Be Food Smart app (now called Food Scanner app), which aims to help parents make sense of nutrition labels. The new app took the Sugar Smart app a step further to include fat and salt amounts in addition to sugar. We also published supporting pages on sugar, saturated fat and salt to help showcase what parents need to know about what’s in their family’s food and drink.

In numbers: We reached more than 5.9 million users via social media, an increase of 73% compared to the previous year’s campaign. 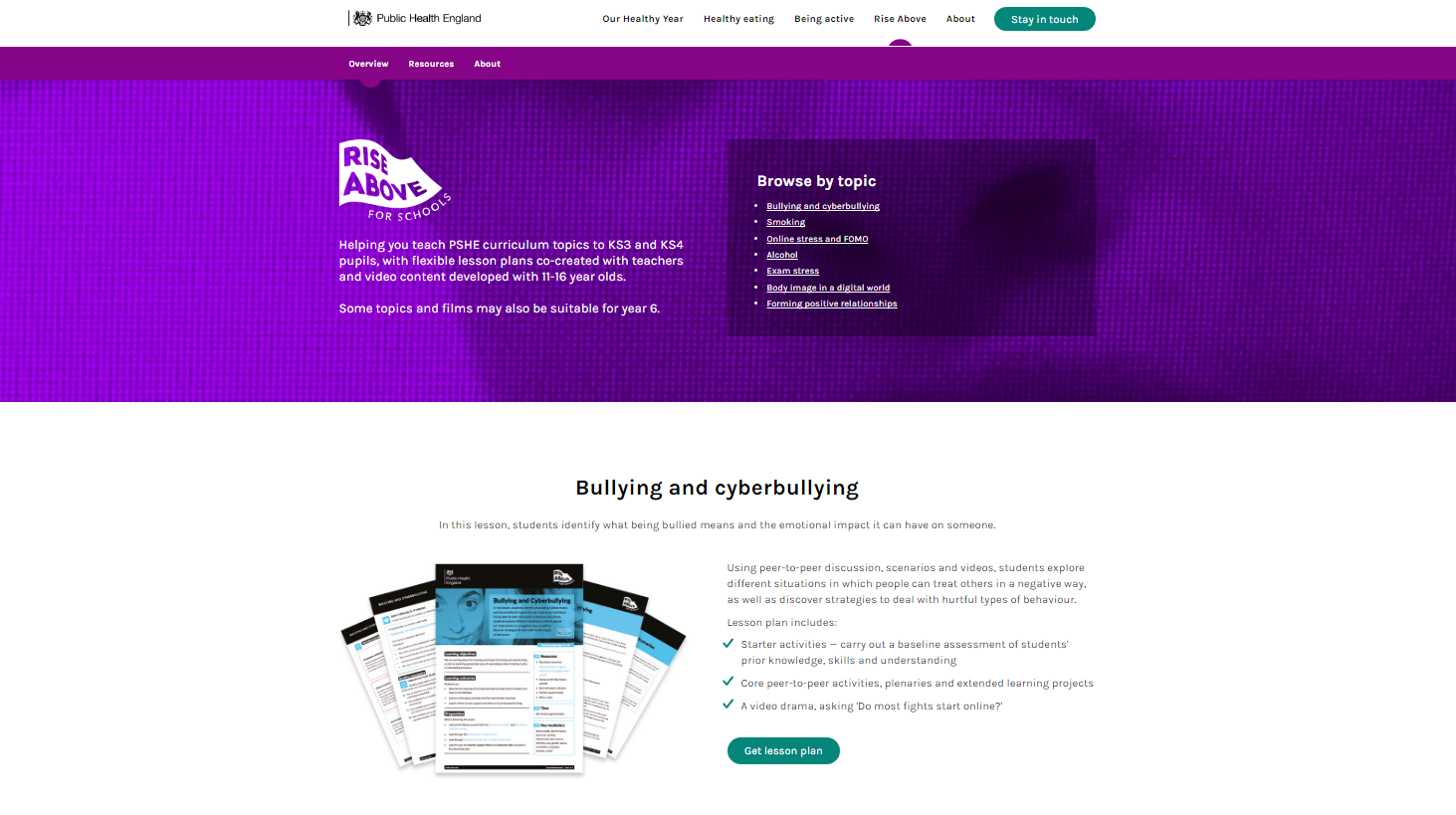 The new Rise Above section on School Zone

Design, UX and content came together to develop and test a new section called Rise Above, to expand the School Zone’s existing offering from primary school children to also include secondary school age groups. PSHE teachers can now get secondary school resources tackling potentially damaging or risky behaviours such as online bullying, smoking and FOMO (‘fear of missing out’). The MVP launched in August and is due to be further developed in 2018.

Start4Life launched the Breastfeeding Friend chatbot in March. The new service was promoted on the Start4Life site and across Choices. It’s accessible via Facebook messenger and has lots of tips and expert advice. Users type in their questions, which can be on anything from which vitamins they should take while breastfeeding, to how to deal with mastitis. They can simply type in a word such as ‘mastitis’ and the chatbot will pull up the relevant information as well as any related content.

In numbers: The Breastfeeding Friend chatbot is now used by about 750 new parents every month.

Extensive user testing took place in April for the Change4Life redesign, including content card sorting exercises and prototypes that were iterated between testing sessions. The major design and information architecture decisions were led by user feedback. One of the main aims of the redesign was to finally archive and redirected all remaining old SharePoint pages, removing outdated content and migrating all other content to the new site templates. The content work, design refinements and build continued until the July launch date.

Key insights: User feedback shaped the naming of the site navigation and we confirmed that real images, especially of food, have a more powerful effect on users to drive behaviour change.

May – Campaigning during purdah

A routine re-run of the Be Clear on Cancer breathlessness campaignlooked likely to be postponed, or cancelled, following the calling of the general election. DCT worked with Public Health England and NHS Choices colleagues to ensure that the campaign could go live as planned in May by complying with special exemption rules during purdah. The messaging from 2016 was recreated using the exact same format, which meant that it could be published.

June saw the launch of a new dedicated case study page on the Campaign Resource Centre (CRC), which displays a collection of case studies from previous campaigns that CRC’s users have launched around the country. The page displays a ‘Featured Case Study’ along with flip cards of other case studies which can be sorted and filtered by campaign, region and topic.

The new Change4life website launched in July, and took the Campaigns Team 6 months to design, write, build and test. This new site replaced a confusing array of legacy pages and campaign additions that used to form the vast majority of the Change4Life digital offering. The redesign kicked off with extensive user testing, which also took place throughout the build, and the major design and information architecture decisions were led by user feedback. Read about the 10 biggest changes we made.

In numbers: The quiz flip cards, which convey policy information in an interactive way, are proving most popular since launch with 88,518 clicks in total since July 2017 clicks.

August – It’s good to walk!
Active 10, PHE’s physical activity drive to get 40- to 60-year-olds moving, was launched with a major multimedia campaign in August. DCT created the new campaign page as part of the One You website, featuring an embedded video of the TV ad and a postcode search allowing visitors to download vouchers for free activity taster sessions with UK Active. This activity followed a soft launch in March, and rapidly shifting deadlines meant an agile and flexible approach was essential to deliver this campaign.

For the fourth year running, DCT worked on the Stoptober campaign releasing it with a soft launch on 14 September, and a full launch to include the TV advert on 21 September. The 2017 campaign page, was a full page campaign, based on the 2016-page template – which was a shift from the blog-style campaign pages that were created in previous years. The key messaging centred around how if you stop smoking for 28 days you’re 5 times more likely to quit for good and the array of support available to help you get to 28 days smoke-free.

In numbers: 202,320 visits with 25,288 sessions that either went to the app store, clicked to sign up for email or clicked through to the Messenger bot (during campaign period – 21 September to 31 October).

October – Getting flu season wrapped up

Following user testing in the summer, DCT relaunched PHE’s winter wellness campaign Stay Well This Winter in October, to encourage uptake of the free NHS flu vaccinations (plus self-care messages about colds and coughs). With NHS England gearing up for a particularly challenging flu season, DCT delivery managers and content designers were able to advise on how best to present these crucial health messages on the updated Stay Well This Winter website. NHS Choices also promoted the campaign on its homepage.

In numbers: 85,000 visits and 2,300 Pharmacy or GP finder searches (since 2 Oct). We also produced a partner pack that at least 281 NHS and other organisations have used on their social and digital channels so far this winter, ensuring a coherent campaign across the whole health and social care system.

November – A new start for Start4Life 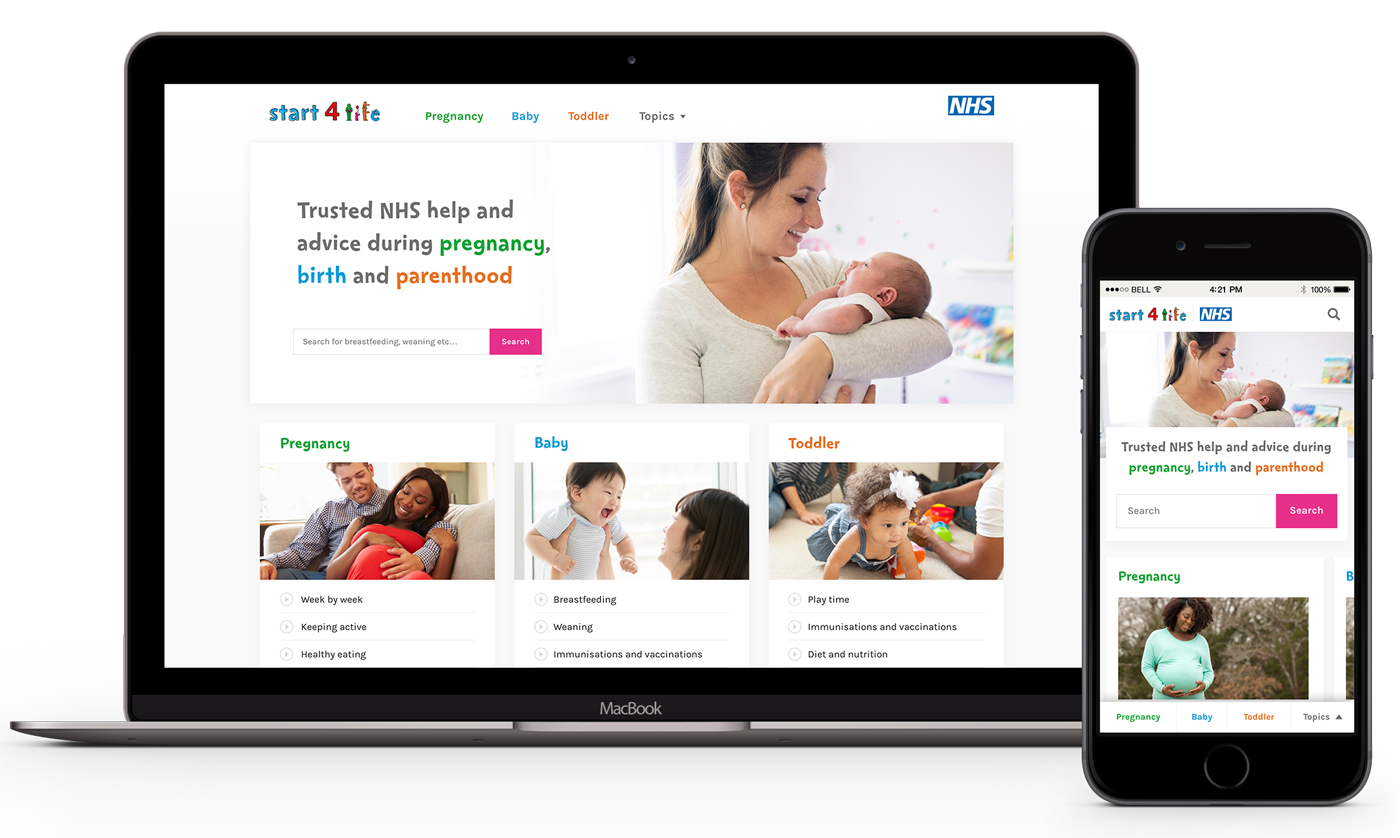 After speaking to mums and mums-to-be in London and Leeds, it was clear the current Start4Life website has lots of great information but isn’t meeting user needs. Armed with user insights we started to redesign the website to turn it into a more user-friendly hub of information about pregnancy, birth and the early years of parenthood. With a modern, mobile-friendly design, refreshed tone of voice and a plan for a wider range of content, we’re confident Start4Life will become an essential place for pregnant women to get friendly, NHS-approved advice. Work on the new site is ongoing with the launch planned for early 2018 – watch this space!

Key insights: We need to use a more reassuring tone of voice and expand the content to draw mums-to-be in from early pregnancy.

The ‘Protect against STIs use a condom’ page

December marked the launch of a campaign for a brand-new demographic, 16- to 24-year-olds, to raise awareness of the importance of using a condom, just in time for Christmas party season. The new page has been built on the One You website template and exists as a standalone campaign page.

It’s very different visually from existing campaigns, using real imagery overlaid with emoji facial expressions. The campaign responds to evidence of rises in chlamydia and gonorrhoea in recent years* in this demographic, by providing STI prevention information and signposting to the Sexwise website for more detail.

We kicked off 2018, in usual campaigns style, with the launch of the Change4Life snacking campaign on 2 January, which aims to help parents choose healthier snacks with a handy slogan “look for 100 calorie snacks, two a day max!” and real-life photography of snack ideas.

Work continues on the Start4Life redesign, including extensive content work. Plus, there are other site redesigns being considered and upcoming campaigns being briefed in – all exciting new developments that will make our sites much better for users, with the ultimate aim to drive behaviour change. So, stay tuned!

*Study in the Journal of Adolescent Health