A gentle introduction to APIs and how they work.

On this page we explain what APIs are and how they work.

If you already understand terms like REST and JSON, you might want to skip this and go directly to our API catalogue to find out what APIs are available.

What is an API?

API stands for Application Programming Interface. Simply put, an API allows computer systems to talk to one another. Here’s an example:

In the above diagram:

We say that System B “presents” or “exposes” an API, and that System A “calls” or “makes a request to” that API.

Because the response is usually implicit, we sometimes draw the diagram with a single arrow, like this:

With a synchronous API, the response is immediate, as in the example above. We sometimes call this a “real time” response.

With an asynchronous API, the response is not immediate, other than to acknowledge receipt. For example:

This is sometimes called a messaging API or a “fire and forget” API. It’s similar to paper mail or e-mail with recorded delivery. The sender knows the message has been received, but not that it has been processed.

The receiving system might send a message back to the original sender some time later. For example:

Often, systems send messages via an intermediary known as a “message broker”. Some message brokers deliver the message on to the recipient, like a postman:

Asynchronous APIs are generally used when:

Systems usually talk to one another due to user actions. For example:

Sometimes, local systems need to talk to other local systems. They might talk directly to one another, for example:

More commonly, they talk via a national message broker system. For example:

For systems to talk to one another, they need to agree what to say. To do this, the developer of the responding system publishes an API specification that explains exactly how to call the API.

The developer of the requesting system read the API specification and builds their system accordingly. 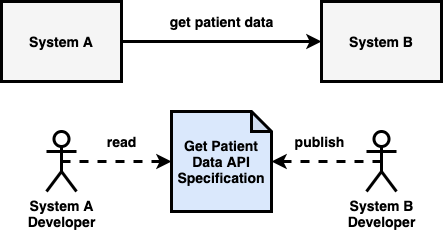 We publish a catalogue of API specifications for all our APIs.

If all systems talk the same language, it makes it easier for software developers to get them to talk to one another.

NHS Digital has been developing APIs for quite some time. We always aim to adopt the latest standards for new APIs. But it’s costly to rebuild APIs when technology changes. As a result, our APIs use a variety of technologies, including:

Most of our APIs give access to personal or sensitive data. We have a responsibility to make sure it is only made available to the right people.

We do this in a variety of different ways depending on the type of API. For more details see security and authorisation.